is the codename of the operation to eliminate Reinhard Heydrich, a head of the Imperial Security Directorate, deputy (acting) imperial protector of Bohemia and Moravia. The operation was prepared and carried out jointly by the British special services “Office of Special Operations” and the National Committee for the Liberation of Czechoslovakia (the Czechoslovak government in exile). 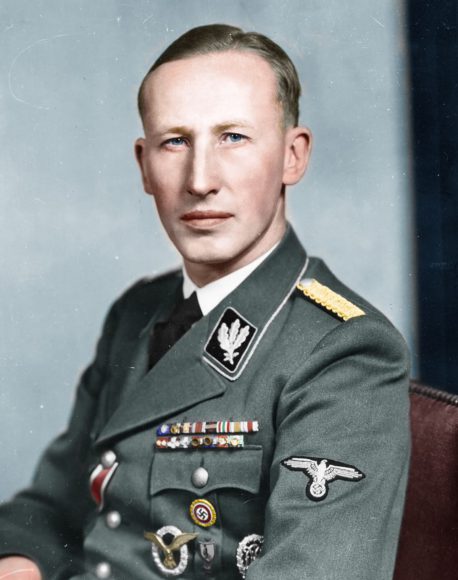 Who was Reinhard Heydrich?

Reinhard Heydrich is called only the main executioner of the Third Reich and a global war criminal. Heydrich made a huge contribution not only to the policy of extermination of Jews, he personally fought against the internal enemies of the fascist regime. However the successful career of the Obergruppenführer SS was short-lived. From an early age Reinhardt was interested in politics. When the First World War began, Heydrich was 10 years old. Heydrich had the opportunity to watch demonstrations and street skirmishes in his hometown of Halle at the end of the war.

Reinhard Heydrich served in the Navy in the 1920s. He joined the NSDAP (later the Hitler controlled governing party) in June 1931, receiving a party membership card number 544 916, and the SS (ticket number 10 120). Together with militants from the SA, Heydrich took part in battles with socialists and communists. He was promoted by the Reichsfuhrer SS Heinrich Himmler. Heydrich managed to interest Himmler with his proposals for the creation of an intelligence system. After that Reinhardt began to search for and eliminate Hitler’s enemies, among whom were very high-ranking Germans.

Reinhard took over as imperial protector of Bohemia and Moravia on September 23, 1941. 207 people were executed in the first 12 days of Heydrich’s reign. In total, 7,000 people were arrested during the 7 months of his rule in the Czech Republic. He ordered 200,000 pairs of shoes to be allocated for those, who were employed in the military industry. The number of cigarettes and products issued by cards to other categories of citizens was also increased. Hotels and pensions in Karlovy Vary and other resorts have become holiday homes for workers. In addition workers were given free tickets to football, theaters and cinema. The May Day was declared a public holiday. His plans included the complete Germanization of Czech people.

Heydrich’s popularity in the Czech Republic increased sharply, so in Prague he felt very comfortable, even moving around the city in an open car without security. Edward Benes the Czech president, who at the time lived in England in exile, was annoyed by Heydrich’s behavior. The government believed that collaboration among Czechs began to exceed a reasonable measure. It was necessary to act radically because the authority of Czechoslovakia reached a critical point in the eyes of the allies. The population needed to be given an impetus to start the fight against fascism.

Heydrich freely moving through the streets of Prague was a perfect target to assassinate.

Gabcik and Kubis and their deadly mission

Special paratroopers units were trained in Great Britain and later deployed in Czechoslovakia. The land was not safe and welcoming. The mission was dangerous and results were uncertain from the very start. The paratroopers were welcomed by a frightened population and potential betrayal on every step. The previous training turned out to be completely inadequate, almost all the groups did not get where they planned, some of the soldiers were injured during the insertion.

The main role in the assassination attempt on Heydrich was assigned to Jan Kubis and Joseph Gabcik.

As the first attempt to deploy failed, the group was finally dropped into the territory of the Czech and Slovak Protectorate on the night of December 29, 1941. They landed in the suburbs of Prague in Nehvizdy. They began to carry out the operation only in May 1942, as Gabcik injured his leg during the landing.

The road in the Prague suburb of Kobylisy, on the way from the Heydrich’s country house in Panenske Brezany to the center of Prague, there was a sharp turn, where the Heydrich’s vehicle had to slow down inevitably… Originally the plan was to take Heydrich down in his countryside house, but there was no where to hide.

photo: archive of the Military history institute and Eduarda Stehlík

Kubish and Gabchik arrived at the place on the morning of May 27, 1942. They stood at the tram stop. Another member of their group Joseph Walcek gave the signal, when he saw Heydrich’s car approaching. At 10:32 AM, when the car was directly in front of the assassins, Gabchik tried to fire from his Sten submachine gun. Unfortunately the weapon jammed. Obergruppenführer noticed his potential killer and ordered the driver to slow down. Heydrich took out the gun and aimed at threaten soldier, but his weapon did not work too. Jan Kubish panicked and threw a satchel charge at the protector’s vehicle, but it rolled under the right rear wheel and only exploded there. Heydrich was not killed. He had a broken rib and wounded spleen. He found the strength to get out of the car, but fell nearby yet ordering the driver to pursue the attackers.

The hunt of the assassins

Both accomplices managed to escape. Despite the relative ease of his injuries, Reinhard Heydrich died on June 4, 1942, presumably from sepsis. Heydrich was buried in the Berlin Disabled Cemetery, but after the war ended, the tombstone was destroyed. Now the place of his burial is unknown.

The post of imperial protector of Bohemia and Moravia was acquired by the Oberstgruppenführer SS, Colonel-General of Police – Kurt Daluge. A state of emergency was introduced in the Czech Republic; any information about saboteurs, was granted a bounty.

10 000 000 bounty for the information about the offenders

Seven Czech paratroopers (Josef Gabchik, Jan Kubish, Jan Khruby, Josef Valchik, Adolf Opalka, Josef Bublik and Jaroslav Schwartz) tried to hide in the Cathedral of Saints Cyril and Methodius that is the main Orthodox church in Prague. It is located on Resslova street in the Prague district Nove Mesto. Here is the chair of the Primate of the Czechoslovak Orthodox Church. Originally built as the Catholic Church of St. Carlo Borromeo. The church was transferred to the Orthodox on July 29, 1933 by decision of the Council of Ministers of the Czechoslovak Republic. Then the cathedral was consecrated in honor of Saints Cyril and Methodius, whose mission included Czech lands too. Among the Germans, the church continued to be known as the Carlo Borromeo Church.

The paratrooper of the “Out Distance group”, abandoned on March 28, it was the traitor Karel Churda, He voluntarily provided the Gestapo the names and places of residence of dozens of Resistance fighters and their families. They were immediately arrested on June 16. During interrogations and torture, the Germans learned that paratroopers are taking refuge in the cathedral of the Saint Cyril and Methodius. On June 18 troops under the command of the SS brigadeführer Karl Fischer von Treuenfeld stormed the church.

The battle ensued at 4:10 in the morning. First the Germans searched the sexton’s chambers and then entered the church building. They examined the choir when Opalka, Kubish and Bagel opened fire. For two hours they fought with the Germans until they ran out of the ammunition. Opalka and Bagel using the remaining cartridges shot themselves, not wanting to surrender. Kubis died of fatal wounds suffered during the shootout.

Another group of Gabchik, Valchik, Gruby and Schwartz hid in the crypt of the temple. The Germans threw hand grenades into the ventilation department and fired tear gas, but the paratroopers could not be smoked and did not give up. 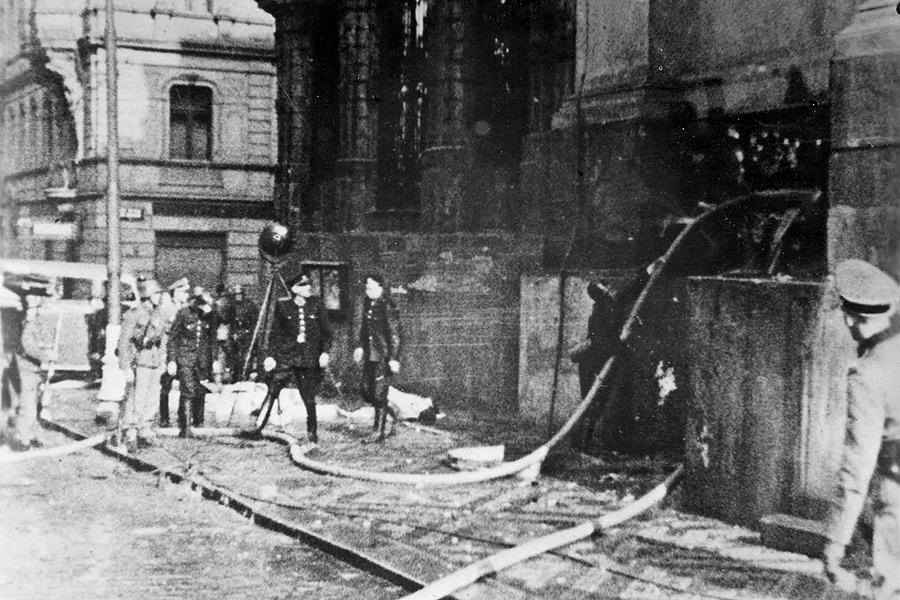 photo: archive of the Military history institute and Eduarda Stehlík

Firefighters were called to help the Germans, who tried to flood the besieged with water. But the paratroopers pushed the fire hose back into the street using a wooden ladder and fired at the firemen. The situation was complicated after the attackers blew up the old entrance to the crypt. At the same time firefighters managed to pull the ladder out of the crypt and started pumping the water back into the basement. Fortunately for the remaining soldiers hidden in the crypt, it was not possible to flood them as water was leaking down the old base of the building. The paratroopers fought back to the end and when each of the fighters had only a cartridge left, they committed suicide to avoid being captured by the gestapo.

The bodies of the seven dead paratroopers were beheaded and buried in a cemetery in the Prague district of Dablice.

Aftermath of the Operation Antropoid

Reprisals against civilians suspected of helping paratroopers is referred to as the “heydrichiada.” In revenge the Nazi Gestapo destroyed two villages Ležaky and Lidice. One of the bases of the paratroopers was really located in Ležaky. But Lidice was destroyed only because the addresses of two families from this village were found in the things of one of the captured paratroopers. As a result, all houses in Lidice were destroyed, men were shot, and women were sent to the Ravensbrück concentration camp. 294 people were exterminated for aiding the paratroopers during the operation Anthropoid. Over 1300 casualties are connected with the revenge for Heydrich’s death. You can visit the Lidice Memorial in our blog.

Winston Churchill proposed wiping out three German villages in response to the destruction of Lidice. The commander of the British Air Force did not agree with him as that action would require a hundred bombers.

The President of Czechoslovakia in exile Benes congratulated General Moravec on his success and said that Operation Anthropoid was an act of just revenge on the part of the people.

After the war the curator of Operation Anthropoid František Moravec was met with reproaches in the Czech Republic, considering him guilty of the death of thousands of innocent people.

The historical memory of the Operation Anthropoid

The attitude of the Czechs to Operation Anthropoid changed for the better after many years. The parachutists who have eliminated Heydrich are now considered national heroes, films are made about them, songs are written, and marks dedicated to their exploit are released.

The bullet-riddled window of the crypt of the church of Cyril and Methodius and the fire hoses, with which the attackers pumped water into the basement, are depicted on the reverse of a silver coin in denominations of 200 Czech crowns, which the Czech National Bank put into circulation on the occasion of the 75th anniversary of Operation Anthropoid. At the bottom of the reverse are the inscriptions “OPERACE ANTHROPOID”, “1942-2017” and the initials of the designer of the coin, Irena Gradecka, are intertwined letters “I” and “H”. The obverse of the coin shows a part of the Heydrich’s car damaged by the explosion with the inscriptions “ČESKÁ REPUBLIKA” and “200 Kč”.

Kobylisy and the point of attack

Now at this place in Prague you can see the monument: two paratroopers in British military uniforms are Kubis and Gabcik. The third figure symbolizes the Czechs and Slovaks helping them. On the bronze plate is the inscription: “Here on Friday May 27, 1942 at 10.35, Czechoslovak heroic paratroopers Jan Kubish and Josef Gabchik committed one of the most important acts of the Second World War – they killed the imperial protector Reinhard Heydrich. They would not have been able to fulfill this mission without the help of hundreds of Czech patriots who paid for their courage with their own lives”.

The exposition to honor the assassins was opened in 1995 in the crypt of the Cathedral of Cyril and Methodius, in 2010 the exhibition was updated. 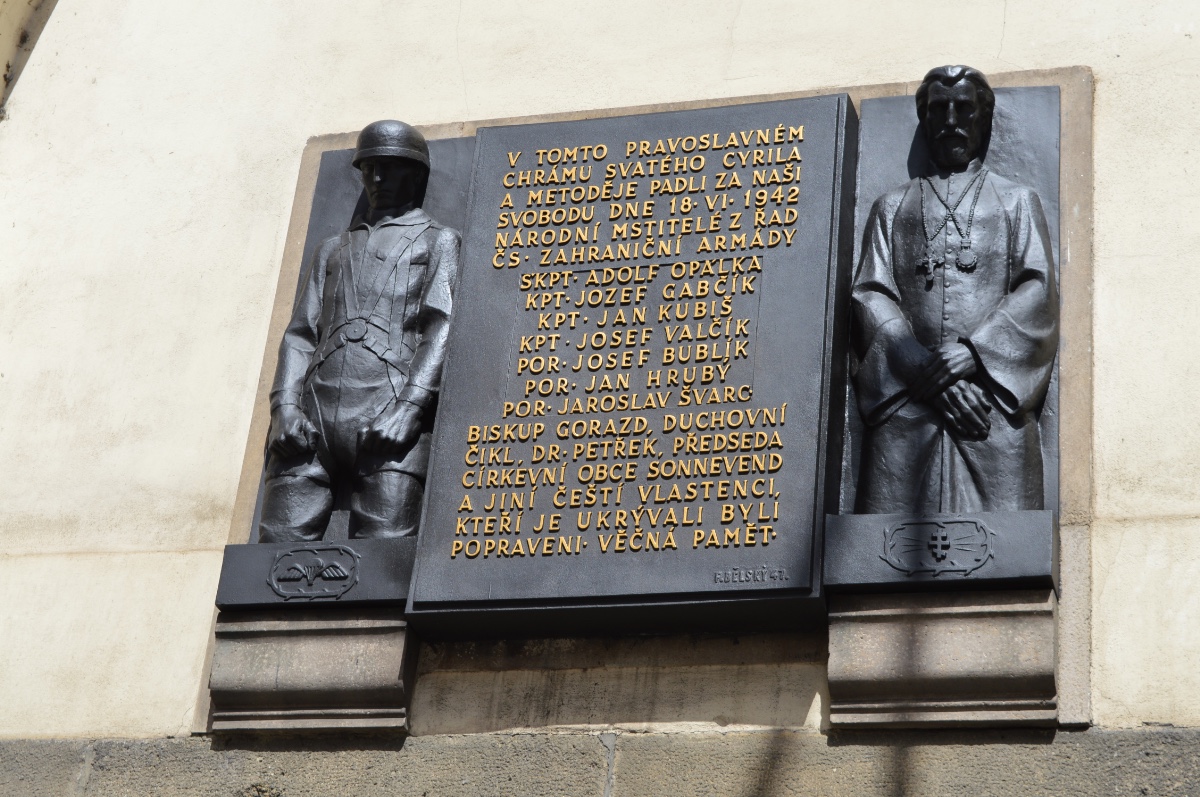 Other points of interest in Prague

The Prague streets Gabčikova, Kubišova, and Valčikova located near the place of assassination were named in honor of the participants in Operation Anthropoid.

One way transfer from Prague to Lidice

May interest you as well:

Terezin Memorial and the Small Fortress in pictures

Should you need more information or be interested in a tour of Heydrich’s assassins, feel free to email us or leave a comment below.

Special thanks to Konstant Teleshov for the help with copyright.