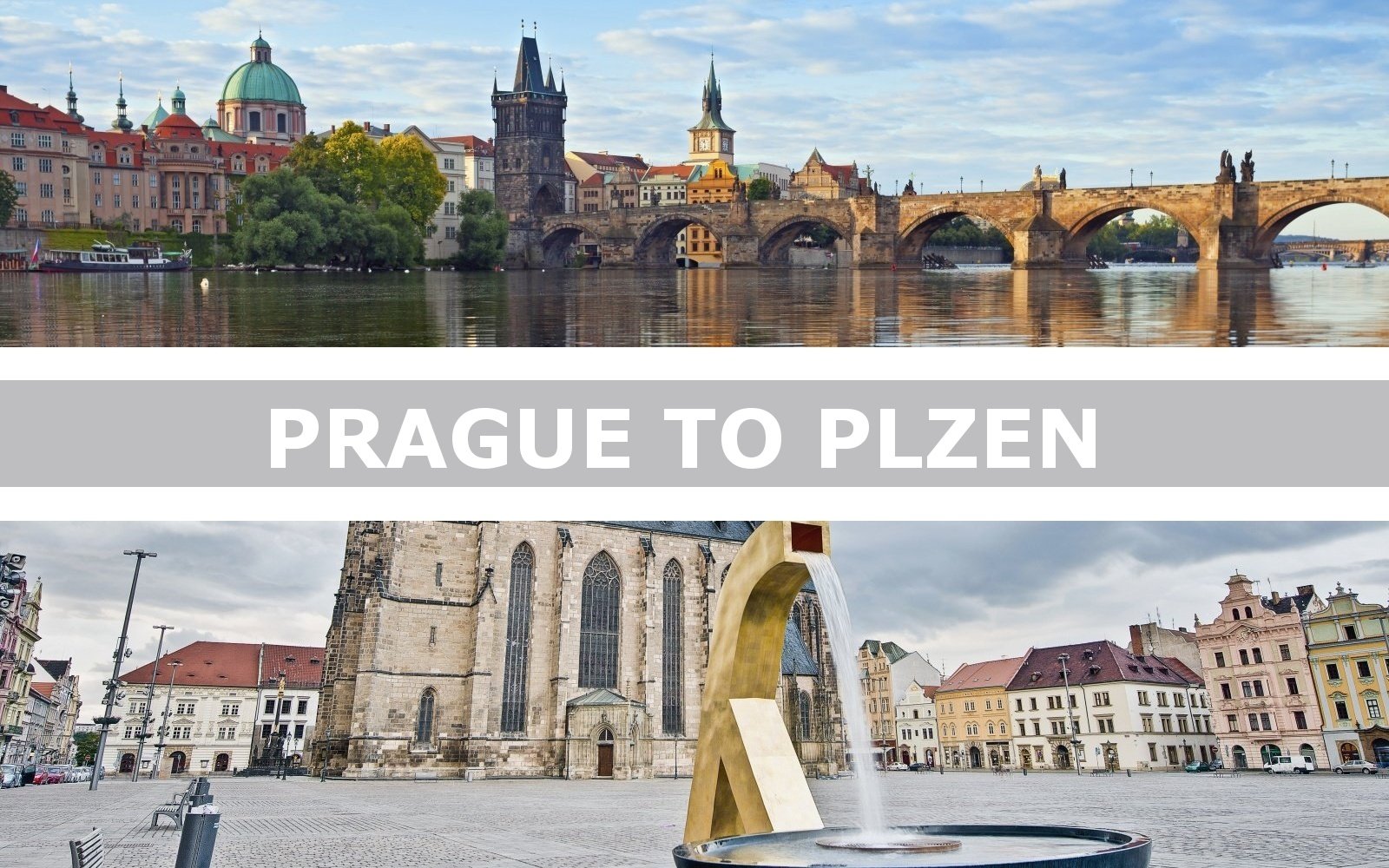 Plzen also known as Pilsen in English is a Czech city that every self-proclaimed beer lover needs to visit. Besides being a beer-lovers hub, Pilsen is also the fourth largest town in the Czech Republic and the European Capital of Culture of 2015. Even though there is plenty to do in Pilsen, it is undeniable that its main attraction is its beer and the brewery – the Pilsen Urquell Brewery. The Pilsen Urquell Brewery gave birth to pilsner beer back in 1842, which was quickly adopted in the entire world. Pilsner beer is so famous that pilsner-styled beers account for two-thirds of beer consumed worldwide. Czechs are aware of the fact, since we drink almost twice as much beer per capita as our American counterparts. Czechs drink the most beer per capita per day in the world.

There are several tours visitors can take at the Pilsen Urquell Brewery. The 2-hour tour will guide visitors through the beer-making process and its history while letting them taste several of their beers.

But there is more to Pilsen than its beer. Pilsen also has a zoo and a dinopark, popular among couples with children. There are several museums. One of the most popular museums in Pilsen is the Puppet Museum, which shows the history of puppetry and how puppets have evolved throughout the ages.

There is also an underground tunnel system that runs beneath the city. Visitors can also tour this 14th century tunnel system, while learning more about its history (hint: it is beer related).

Official website of Plzen is available in English and there are plenty of regularly updated travel tips. List of important happenings (mainly cultural) over the course of the current year can be found .

What to visit in Plzen

Pilsner Urquell is world famous and the largest brewery in the Czech Republic. The brewery was founded in 1842. The biggest Czech beer manufacturer exports the beer to over 50 countries. Annually the brewery received about 250 000 visitors from all around the world. Many come on bus and coach tours, but individual tourist use trains and buses from Prague or hire our transportation service to get them to the Pilsen brewery and return. The trips are available from Prague as well as from Munich, Nuremberg and Regensburg. Other pick up places are available on request.

Tours of the Pilsner Urquell Breweries are available daily and cost 200 CZK per adult person in 2019.

It is recommended to book the tour in advance at the official website of the brewery tours.

The core of the city center is surrounding the large square, which dimensions of 139 by 193 meters ranks it one of the largest squares in Europe. The town square is dominated by the St. Bartholomew's cathedral accompanied with a plague column and three golden fountains. The Republic Square is a natural cultural center of the town and place that holds various festivals and markets.

At the height of nearly 103 meters the tower of the Cathedral is the highest church tower in the Czech Republic. The Cathedral was founded along with the city around 1295. The Church is 58 meters long, 30 meters wide and 25 meters high. Inside you can find the Madonna of Pilsen. 134 centimeters high statue of Virgin Mary with baby Jesus placed in the middle of the neo-gothic altar.

Built in 1558 according to the design by Italian architect Giovanni de Statia. The sgraffito decorations show the coats of arms of Plzen and depict the Czech rulers. The town hall is referred to as renaissance gem of Pilsen. 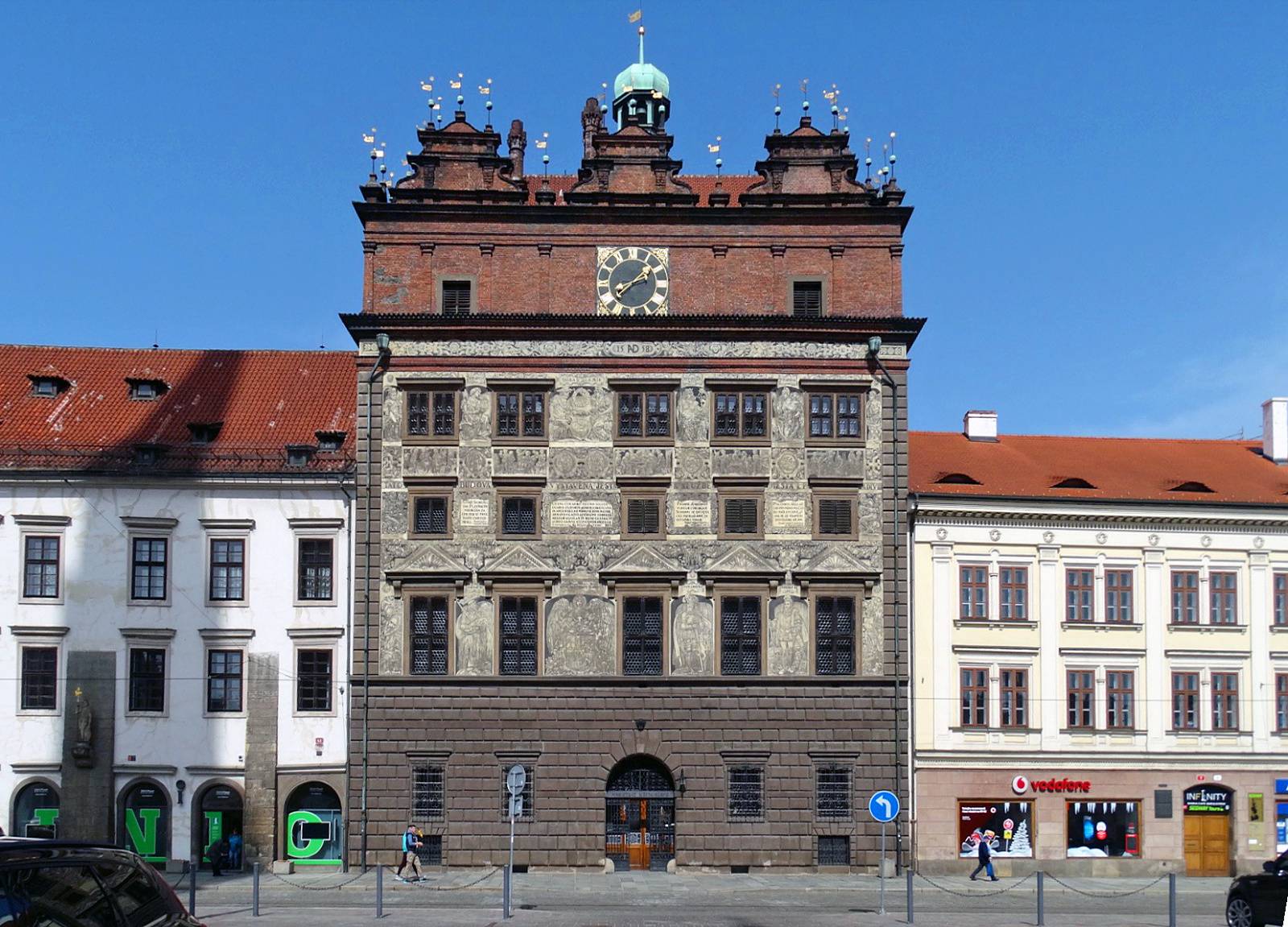 On the left side of the renaissance Town Hall you can find the Cisarsky Dum - Imperial House. The statue that stands on the massive pillars is the knight Roland, in some guides also called Zumbera. The knight Roland represented order and justice in the city. The house is named after Rudolf II emperor. The monarch fled to Pilsen during the Prague plague in September 1599. Today the Imperial house houses city mayor's office. 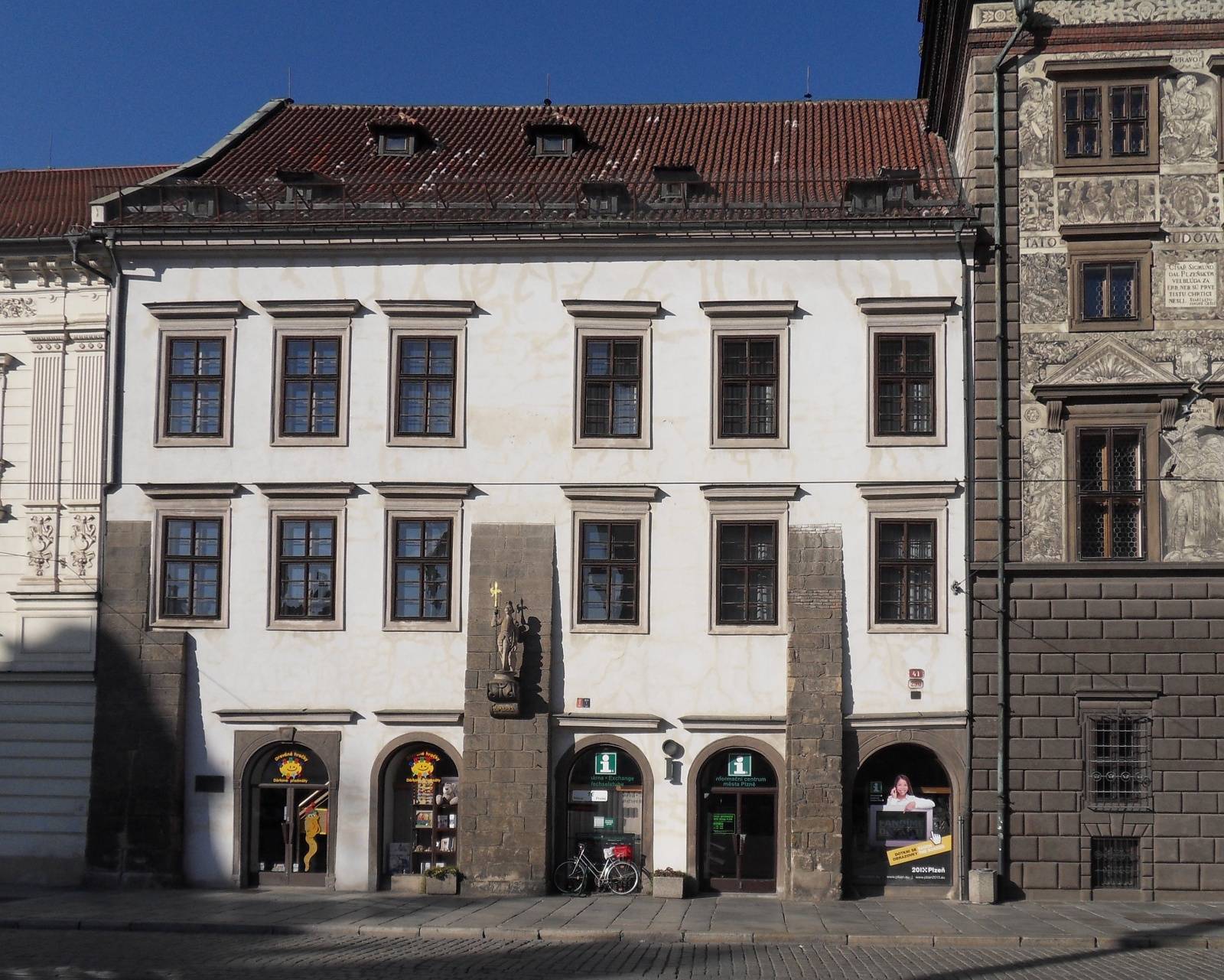 It was erected in 1681 as the expression of gratitude for less severe epidemic plague in Pilsen. On the top of the column is a replica of the famous Pilsen Madonna. 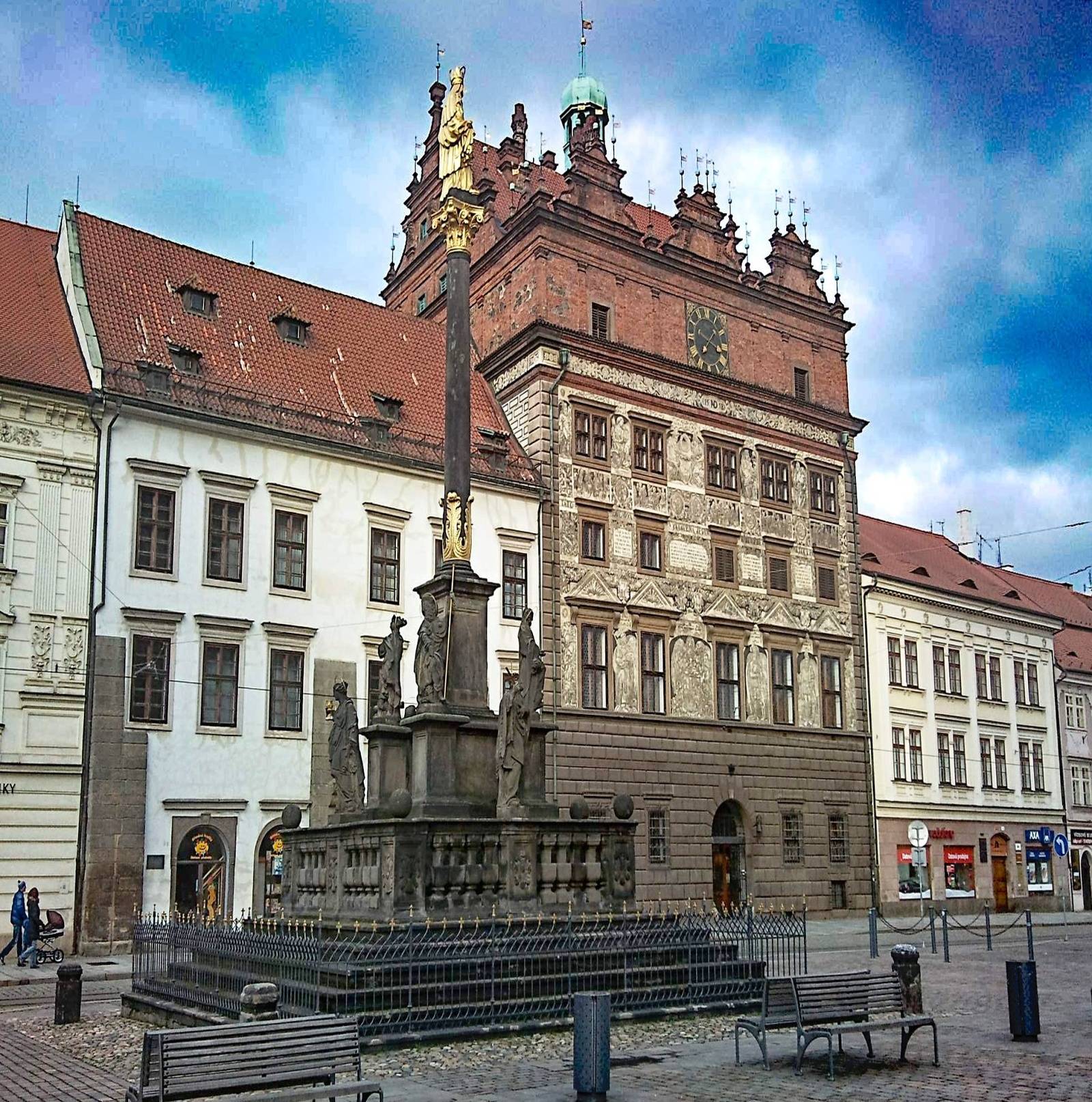 The diocese building was founded in 14th century and originally was used as the presbytery. Since 1993 is the headquarters of the bishop's office. The building undergone two big reconstructions. The first in 1507 and the second in 1710 by Jakub Auguston. 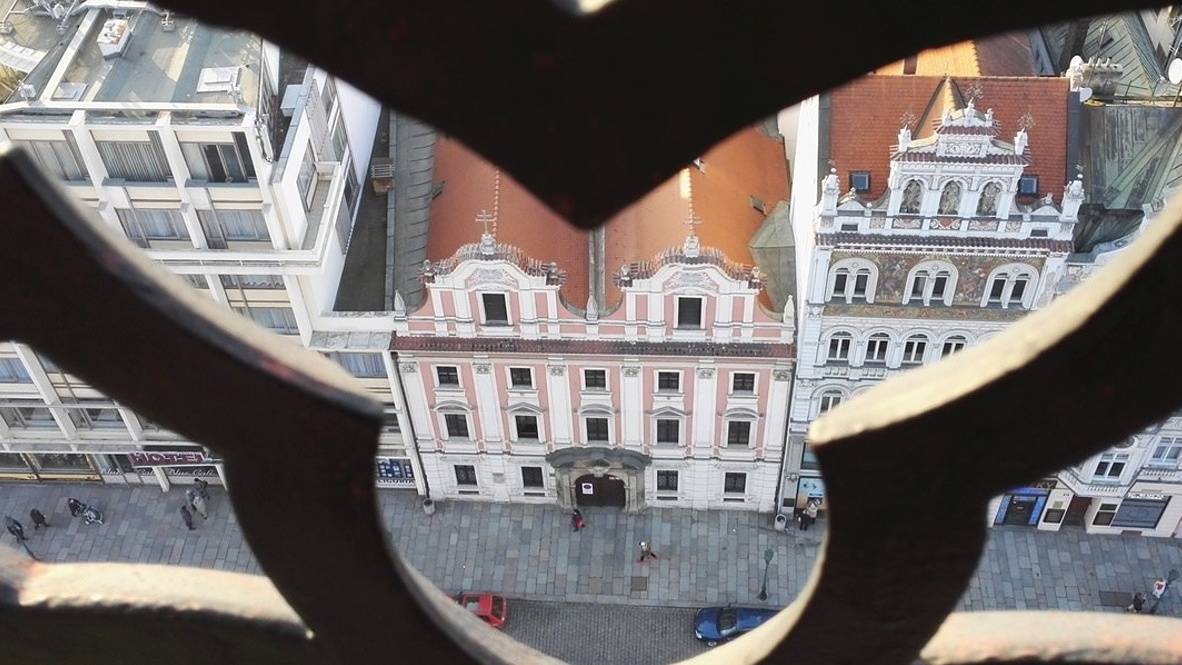 House at the Red Heart

In the middle of the house facade you can easily spot the Red Heart - the sgraffito by Mikolas Ales. The sgraffiti displays the famous tournament held in Pilsen in honor of Ferdinand II of Tyrol.

Source of the picture. 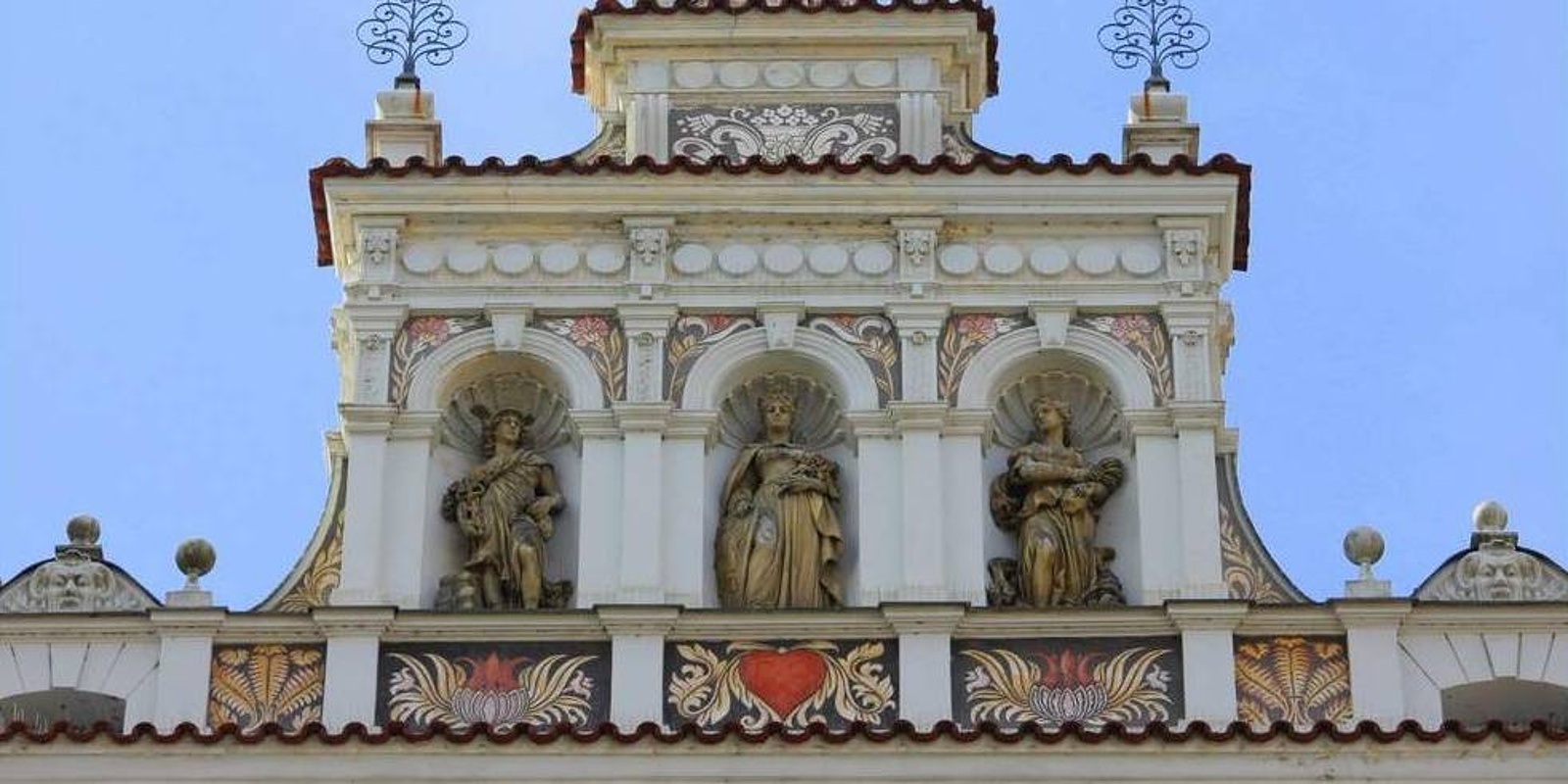 Tour of the city center

A tour of the Pilsen city center is proposed at the Pilsen.Eu official website.

The ancient tunnel system that runs beneath Pilsen dates back to the 14th century. The 12 mile long tunnel system was used as a hideout during times of war and as a storage facility for the beer produced in the city. Visitors are not advised to visit the tunnels alone, since they can get lost rather easily. Luckily, there are plenty of guided tours available.

Since Pilsen seems to be the de facto beer capital of the world, it is no surprise that most of its attractions revolve around the same theme. The Pilsen Brewery Museum will let visitors know everything they need to know about beer. As with most attractions in Pilsen, the tour ends with a free glass of beer.

Reviews of transfers between Prague and Plzen